Summary. When describing how much greater air pollution in London was in previous centuries, Lomborg presents a graph pieced together from sections of different datasets. His choice between different datasets covering the same period bears no relation to their likely robustness, and seems to have been deliberately made to increase the impression of a steep decline during the 20th century. Indirectly calculated figures from before 1900 are without justifiable reason multiplied by an arbitrary factor of about 5 in order to fit values around 1900 to the artificially increased steepness of the curve during the 20th century. This deliberate manipulation makes it look as if air pollution was much worse in former centuries.

When Lomborg wants to present an optimistic view on air pollution in cities, he can do that by claiming that the problems were much worse in the past. To demonstrate this, he uses London as an example (he could not have used a city like Paris, because Paris was heated by wood, not by coal). On p. 164 he writes: "Air pollution is not a new phenomenon that has got worse and worse - it is an old phenomenon, that has been getting better and better, leaving London cleaner than it has been since medieval times."
His basis for saying so is a paper by the British environmental scientist Peter Brimlecombe. Brimblecombe used an existing computer model which calculates air pollutant concentrations on the basis of the amount of pollutants emitted, the size of the city, and wind speeds. When appllied to cities of varying sizes at the present time it gives values which lie within 20 % of the mean values measured at air pollution monitoring stations in those cities. So it is fair to assume that it could tell us former pollution levels with nearly the same precision.
Brimblecombe recorded the size of London in various years, the amount of coal burned for fuel within the city limits (this is known), and the sulphur content of the coals used (estimated from geological knowledge of the coalfields). With this input to the model, he got the results which are presented in the figure shown below. 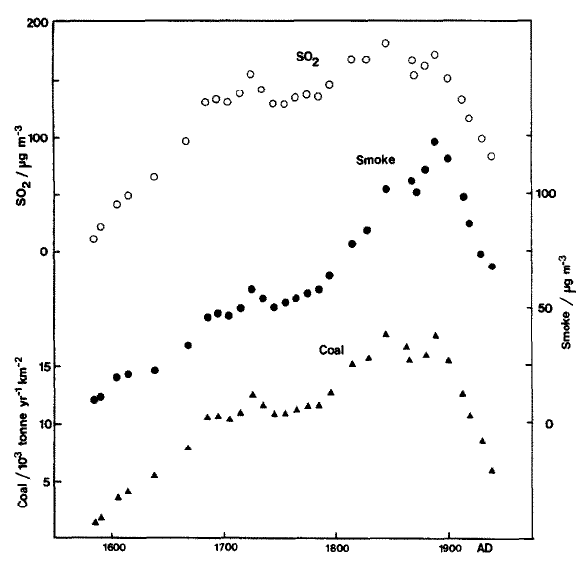 We see that the pollution, e.g. with sulphur dioxide, peaks near the end of the 19th century, which agrees with data showing that the number of  days in London with smog increased  much during the latter half of the 19th century. We also see a steep drop in pollution levels from about the year 1900. The model produces this drop because the diameter of London grew much at this point of time, which would have the effect of diluting the pollution. But this does probably not fit with what actually happened. Brimblecombe writes:  "The decline shown in the pollutant concentrations  . . seems particularly large, and is probably exaggerated by the diffuse nature of the outer parts of the city at the turn of the century. " But unfortunately, to support his point, Lomborg emphasizes this decline and does not cite the author´s reservations.
Next, Lomborg continues the curves up to modern times by fitting in data of actual measurements of the air in central London from about 1930 onwards. Concerning sulphur dioxide, these data are taken from a paper by D.P.H. Laxen and M. A. Thompson, published in 1987. Below I present a figure from their paper with those curves that were used by Lomborg. 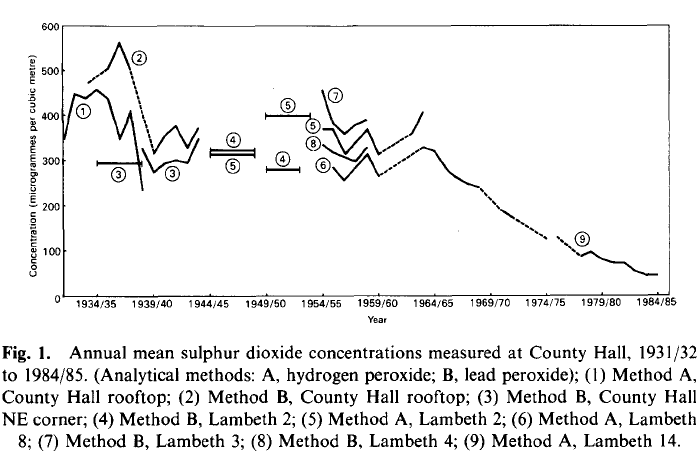